My favorite extensions for Visual Studio 2019

Some of the below items are extension packs, which contain several extensions.

Better Comments is a Visual Studio extension that gives you the ability to customize the font and opacity of your comments independently of the editor’s font settings. It also adds four additional comment classifications, each classification with its own customizable foreground.

BuildVision visualize the building process in a table format. 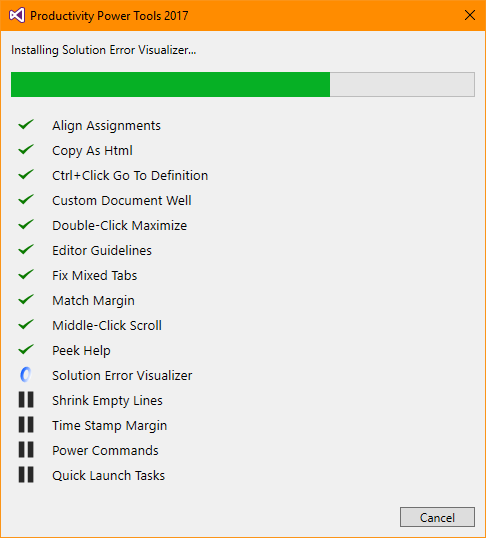 Roslynator 2019 is a collection of 500+ analyzers, refactorings and fixes for C#, powered by Roslyn.

The Essentials is an extension pack for Visual Studio 2019 containing extensions no developer should be without. These extensions will add important functionality that will make you more productive and a happier developer.

Trailing Whitespace Visualizer keeps your code files clean by making it easier than ever to identify and remove any trailing whitespace.

IntelliCode augments existing developer workflows with machine-learning services that provide an understanding of code and its context. It’s applicable for C#, C++ (in preview), JavaScript/TypeScript (in preview), and XAML code today, and will be updated in the future to support more languages.

Visual Studio Spell Checker (VS2017 and Later) is an editor extension that checks the spelling of comments, strings, and plain text as you type or interactively with a tool window. It can also spell check an entire solution, project, or selected items. Options are available to define multiple languages to spell check agains…

Web Essentials 2019 is the easiest way to set up Visual Studio for the ultimate web development experience.

After installing the Web Essentials and restarting Visual Studio, the following extensions will be installed:

NDepend is a Visual Studio and Azure DevOps/TFS extension that makes it easy to manage Code Quality on large and complex .NET code base

OzCode is a revolutionary debugging extension which complements Visual Studio and supercharges the C# debugging experience!.

Did I miss something? If you think so, drop a line with the name of the extension in the comments below 👇. I will be updating this post whenever I find a good extension for Visual Studio.

Written by Abhith Rajan Follow @AbhithRajan
Abhith Rajan is an aspiring software engineer with more than nine years of experience and has a proven successful track record of delivering technology-based products and services.
Connect

Buy me a coffee ☕

This page is open source. Noticed a typo? Or something unclear?
Improve this page on GitHub

NDepend is my favorite static code analyzer for dotnet. Check how I use it.

Planning to create a contact form for your static website? Check out some of the best FREE services to ease your job.

List of extensions which improves default experience of Visual Studio 2010

Visual Studio senior program manager Mads Kristensen has created a new extension pack for the IDE to ease the acquisition of the basic tools that would benefit all developers.